Here is a rundown of some essential house errands that kids can assist you with:
1.Setting shoe stand. This one is quite straightforward. ... 2.Grocery shopping. Kids can help you while for shopping for food. ... 3.Tidy-Up their room. ... 4.Clean table after dinner. ... 5.Setting book stand. ... 6.Fold clothing. ... 7.Organize their toys. ...
Category: Personal hygiene for children Created: Sunday, 18 April 2021 20:24

Got a toddler displaying some weird behavior? Here are some curious symptoms that come with toddler teething.


Got a toddler displaying some weird behavior? Here are some curious symptoms that come with toddler teething.

Inside you’ll find some odd toddler teething behaviors and how you can bring comfort and make it through with minimal fuss. Post contains affiliate links.

Two weeks my 2 year old was abducted by an alien.

His normal happy bubbly self was replaced with an angry, whiny, aggressive counterpart with the same ears.

It was all very baffling.

We watched his behavior erode throughout the week. Everyone in the family noticed it. I went through my normal mental checklist…

Well, after a long hard week on Friday evening I was done and we loaded all the kids up and took him to the semi local Minute Clinic.

The nurse practitioner took one look in his mouth and said, very nonchalantly…

“It’s his 2 year molars… look how swollen his gums are!”

I am such an amateur.

Oh it was a bad week with this one. This afternoon I finally decided to go to the doctor and pray he was sick and that this wasn’t just his new personality. Turns out it’s his 2 year molars… I AM SUCH AN AMATEUR. ???

Toddler Getting Their 2 Year Molars?

This image will give you an idea of when to expect your little one to get teeth.

Here are some baffling behaviors that seem to accompany toddler teething. 2 year molars (second year molars) can be moving around under the gums for quite a while before any teeth break through.

These behaviors may be an indicator the time is drawing nigh.

1. Anger Due To Teething Pain

Does your child suddenly seem to be more angry than normal?

Something small, like a perfectly normal Winnie the Pooh plate, can become an object of scorn since it is not a simple blue plate to a toddler teething.

Often my toddlers started to exhibit a lot of anger that didn’t seem reasonable or characteristic of their temperament.

Teething is painful for little ones and pain steals a child’s ability to focus well or withstand otherwise normal frustrations.

2. Whinging And Whining Happen When Teeth Are Trying To Break Through

Or, as we say in the good ole US of A, whining. In retrospect, one thing all my kids have done when getting their 2 year old molars is to fall down on the floor while wailing and flailing.

I wish I was joking.

When little ones are in pain their tempers are short and they are *this close* to losing emotional composure at the drop of a hat.

This is why helping alleviate their pain, helping distract them, and extending a little grace go a long way. 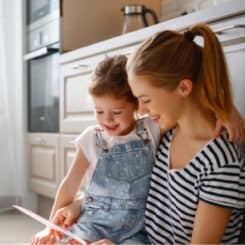 Pull out these fun questions to share some laughs with your precious ones. Use them out at meal times, car rides, or any time the day is getting chaotic and you need a reset to connect.

A dear friend wrote the other day saying her 2 year old had stopped napping. He was clearly exhausted and not actually ready to drop naps and yet, he had trouble falling asleep.

He’d wake in the evening tired as well she couldn’t figure out why. So she took him to the doc and – lo and behold – 2 year old molars.

Word to the wise mama: do not drop naps at 2 years of age if you can at all help it.

Toddlers will try to convince you (and themselves) they don’t need naps around this time, but if you stay consistent and help alleviate their pain so they can sleep they’ll push through and continue napping for another year or more.

Watch my video on the biggest thing to remember in the throes of the 2 year sleep regression.

I put that in brackets, but one thing I’ve noticed when my toddlers are teething is an uptick in boundary crossing.

They stop following rules they used to keep and seem to defy my word more.

They’re not as happy or cooperative and you often begin to question whether you need to change disciplinary tactics.

If it’s teething, just help with the pain and ride it out. Kids who are in pain and uncomfortable simply aren’t at their best. When we are in pain, we aren’t either!

This is usually a big signal for me that something physical is happening with my child. I don’t know how I missed it with my 2 year old a few weeks ago, but hindsight is 20/20.

His usually happy bubbly self became sullen and angry. He stopped playing happily with the others and became very quick to hit, bite, or scream. Instead of going to sleep happily he’d fight bedtime and wake up at night.

He refused meals he normally loved and just did not act like the same child.

So now that we know how teething can cause a lot of pain for our little ones, here are some remedies that can help you manage their pain.

You can also freeze things like wash cloths or pacifiers if your child will put something super cold in their mouths.