Here is a rundown of some essential house errands that kids can assist you with:
1.Setting shoe stand. This one is quite straightforward. ... 2.Grocery shopping. Kids can help you while for shopping for food. ... 3.Tidy-Up their room. ... 4.Clean table after dinner. ... 5.Setting book stand. ... 6.Fold clothing. ... 7.Organize their toys. ...
Category: Personal hygiene for children Created: Saturday, 03 April 2021 20:24

Inside you’ll find tips on how to get your breastfed baby to take a bottle.  That job interview was the first time I’d left my baby. I put on real clothes, actually did my hair, and prayed I wouldn’t leak through my nursing pads and silk dress shirt as I went off to meet my […]


Inside you’ll find tips on how to get your breastfed baby to take a bottle.  That job interview was the first time I’d left my baby. I put on real clothes, actually did my hair, and prayed I wouldn’t leak through my nursing pads and silk dress shirt as I went off to meet my […]

Inside you’ll find tips on how to get your breastfed baby to take a bottle.

That job interview was the first time I’d left my baby. I put on real clothes, actually did my hair, and prayed I wouldn’t leak through my nursing pads and silk dress shirt as I went off to meet my future boss.

Before I left I fed baby girl then drove off to a nearby city. I had gotten her some formula and a proper bottle and wished my husband good luck.

I felt my phone blowing up all during the interview, but I ignored it. The feeling of anxiety started building in my stomach and when I got to the car I saw it was, in fact, my husband.

“She won’t take the bottle!” he said. “She’s crying and fussing and won’t take it.”

I cannot lie…my first thought was what a loyal baby I had.

But then I could hear her cries through the phone and then I felt anxious.

I told him I’d be home in an hour and to do his best. The whole drive home I berated myself for being a bad mom.

I thought about how she was starving and would probably be scarred in some because I left her. She’d hate me and we’d never be able to bond.

All of that simply because I’d taken 3 hours to go for a job interview and was not there for her.

So, for those of you who are telling me…. “Baby won’t take the bottle, HELP!” I’m here to help.

How to Get a Breastfed Baby to Take a Bottle

Here are some ways you can try separately or together to try to get your breastfed baby to take a bottle.

Sometimes you need more than a 2 to 4-hour window of time away from the baby for various reasons, and just knowing your baby will take a bottle is comforting.

Plus, daddy or nana may love it too.

Start offering the bottle before you need baby to take it.

Introduce the bottle after a few weeks postpartum to get baby used to it. If you have 3 months maternity leave don’t wait until 2 months and 3 weeks to begin.

It’ll be a harder transition for baby and that’ll add mom guilt to your already overwhelmed plate.

With my third born I’d let my husband give him a bottle while I took a bath or a walk. I was nearby in case it didn’t “work” but it helped us introduce the bottle before it became necessary which was less stressful for everyone.

Read: The No Tears Approach to Running Errands and Doing Appointments With Baby

If you wait until your baby is starving and ready to breastfeed, this is the worst possible time. They will begin to feel frustrated, impatient, and hungry.

A good time to introduce the bottle is when they are not hungry, but might be willing to try. This can happen after you give some solids (if they are that old) or even as long as 45 minutes to an hour after you’ve normally fed them. 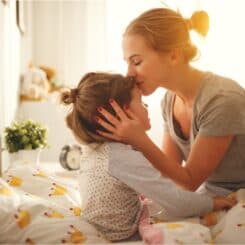 Get my cheat sheets (newborn up to elementary aged kids) and find your family’s groove. Use them for nap times, meal times, bedtimes, chore times, play times AND more!

So… you might nurse a little and then offer the bottle.

I’d nurse form one side, offer a few mouthfuls of food, and then offer the bottle. If baby didn’t take it, no big deal, I’d try again later.

This was definitely less stressful than leaving hubby with a bottle and hoping for the best.

Get someone else to do it… (magic bullet).

Let your husband, older child, or other family member be the person who introduces the bottle.

In fact, it’s even a good idea for you to be out of the house.

Babies are able to smell you from a lot further away than you’d think (not to mention hear your voice) so hovering nearby while the bottle is offered may result in the baby resisting the bottle and crying for you.

Psst… remember: your husband isn’t doing you a favor by watching the kids.

Get a breastfeeding friendly bottle.

I made the mistake with my firstborn of trying to get her to take a bottle with a nipple not designed for breastfeeding babies. I’m sure this would be fine for some, but she wouldn’t have it.

With my others, I found bottles that were good for breastfed babies. If you have one bottle and the baby refuses it, that’s not to say she won’t take the bottle with another nipple.

With my last baby we just used whatever inexpensive bottle we had on hand and, voila, he took it with no issue. I think some babies will easily drink from bottles and others are simply more challenging.

Put breast milk in the bottle and on their lips.

If you are planning on pumping then put breast milk in the bottle and show them that’s what’s in it.

By putting some milk on their lips or in their mouth they’ll begin to understand.

Don’t breastfeed immediately if baby has refused the bottle.

If baby refuses an offered bottle and you immediately offer the breast this will send mixed signals to baby and prolong the process.

Change the position (or mimic it).

If your husband offers the bottle then perhaps he wants to keep the baby in a similar position to when you feed him. This will help keep some continuity with feeding associations.

My husband does this with great success.

That said, if baby is fighting that then try a completely different position.

Try a cup… then the bottle.

If your baby is fighting the bottle then try giving him liquid in a cup. He may try to lap it up or suck on the edge of the cup, and will likely find this different enough that it almost resets the moment.

Then afterward, since drinking from a cup does not satisfy the suckle reflex, they will often take the bottle when they wouldn’t before. Offering the cup will put them in a different frame of mind and may be just the thing.

So there we have it. You’ve got to be creative and perhaps even stubborn to make this happen, but it’ll be worth it.

Back to my story…

So what happened with my baby while I was driving?

She took a few sips of water and waited me out with my husband. She had not taken that bottle and she never did.

For nearly an entire year I could not be away from home for more than a few hours.

You better believe I did it differently with my next 4 kids.

Whether you need to work or simply have a few hours to yourself to do life, here’s hoping you can get your little breastfed baby to take a bottle.

But you’ve got this.